Showing posts from March, 2007
Show All

March 02, 2007
Wednesday, February 28, 2007 Note: This no longer has anything to do with the Belize trip and contains some graphic details which some might find disturbing. It's a reflection of my first day back at work after a wonderful 1 month vacation. Suffice it to say, my first day at work did not go well. After an uneventful drive back home from Seattle yesterday, I promptly went back to work today. I was actually quite happy to be back behind the wheel of a bus and was feeling quite joyful driving in the sun. Then the skies blackened and the snow started falling. I burst out laughing as I was driving. Less than 48 hours earlier I had been in 38 degree temperatures in the glaring sun and now I had snow swirling around on the road. I simply couldn't believe how happy I was to actually be back at work. Everything was going perfectly well and I was in a very cheerful disposition. That all changed when a Honda Civic driven by an aggressive driver tangled with my bus and lost out in a big
Post a Comment
Read more 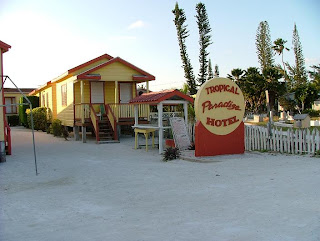 Friday, February 23 Saturday, February 24 Sunday, February 25 Monday, February 26 Day 28/29/30/31 Belize Day 19/20/21/22 No more cycling And the bus showed up on time! I had decided to take the "express" at 7:20am to head back east to Belize City to catch the water taxi to Caye Caulker. They gladly loaded my bike, for an extra fee, underneath the old MCI which was apparently a former Greyhound bus. Then I ascended the steps into the bus and found that there were already about 10 passengers standing. I tried to jam my camera bag into the overhead rack and immediately found that my small emergency rum bottle was leaking and dripping rum onto a couple tenderly sleeping in each other's arms. The man gave me an annoyed look and the woman just smiled wrily when I apologized in Spanish and said "it's only rum". The man helpfully suggested I keep the bag on the floor. Now, in Belize an express bus doesn't seem to mean fewer stops. We stopped pretty much everywhe
Post a Comment
Read more
More posts