Back to The Beach

Cycled 52km ...but it felt like about 100.
Maya Centre to Placencia via land route


The rain was once again extremely refreshing and I was happy not to have any sun. The going was unbelievably good, too good in fact. I had wanted to take the paved road down to Independance and then take the Hokey Pokey Water Taxi across to Placencia. When I got to the road junction for Placencia I spoke to 3 tourists who hadn't a clue what the road in was like, a young man who probably never drove that road himself and who also had no clue. Then I talked to two older people who strongly suggested I not ride that road but take the boat further south instead. Every single person I spoke with had cautioned me against using that road. Based on all that information I decided to cycle the road anyway. There was sand, mud, bumps, drivers who wouldn't slow down and who sprayed me with mud, and of course the ever present heat. This was no doubt the hardest day of cycling yet. The sand on the road made the going excruciatingly slow and painful. But I was very heartened by all the frienly waves and toots I got along the way. And none of the waves involved a middle finger as they sometimes do back home.

I was saddened to see all the ugly monster homes going up on "reclaimed" land all along the way. It also truly pissed me off to see the channels that had been cut through the mangroves to give boat access to the properties. Wholesale destruction of mangroves and bird and reptile habitat for the sake of development. I had to do some quick zen like recentering to remind myself that I was here to enjoy myself and to leave the environmentalist in me at home. As I approached Placencia I could also tell that the energy was much different from the other parts of Belize I'd been to. Lots of North American expats and foreing landowners on their cellphones, talking loudly and swinging real estate deals. I stopped at a little shack selling drinks and had a cola. On the TV they had news from somewhere in New York. Something about a snowstorm dumping 80 inches ...really! 80 inches of snow on the ground with 20 inches more expected. The look on the Belizean owner's face was just precious.

I was incredibly exhausted upon arriving in Placencia. It's the sorest bum I had in a long time. It actually hurt the most when I peeled myself off the saddle. But I knew that Belikins and rum drinks were waiting for me. Then they told me that there was an Art Festival in town and most rooms were taken. I finally did find a room for US$22.50/night. A bit on the steep side for my budget. I managed to take part in the local bar scene to dull the pain and had no problems falling asleep that night. Drinks at the Tipsy Tuna consisted of a full glass of ice, 1 1/2 shots of rum and a stingy amount of mix. All for US$1.50 during happy hour. I guess rum is cheaper than ice. I ran into 3 Americans I had met the night before in Maya Centre and they dutifully assisted me in polishing off a few rum drinks and Belikins. One was down here for 2 weeks, another 2 were taking a course in permaculture and the other one kinda sorta had a "goal" of maybe ...maybe not, being back home sometime around thanksgiving. Then there was Kathy, the young German, who was planning on staying in Central America for 6 months. 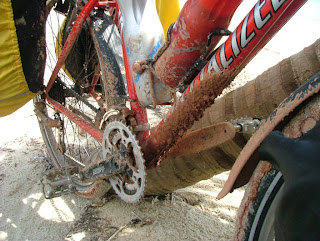 Not Only the Bike Was Covered in Mud. 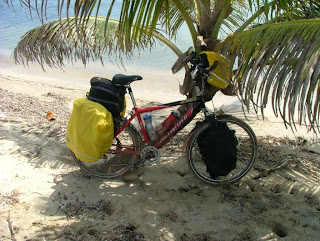 Resting Along The "Road" to Placencia. 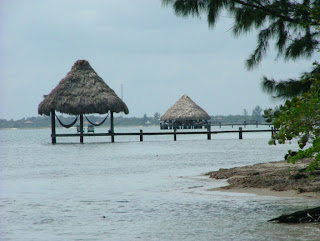