Today was one of my favourite days. Of course all the days so far have been good and special in their own way. I had hoped to do some snorkeling in Placencia in the morning before heading out. The skies once again opened up in the wee hours in the morning. But this time the sand absorbed most of it and I stayed bone dry. The rain pelting down on my tent lulled me back to sleep. When I awoke again at 6:15 the seas were rough and windy. No snorkeling today. It was also too late to pack up and catch the 6:45 water taxi across the bay. Not being one to let these little things bother me, I packed up and headed down to the Purple Space Monkey for coffee. Breakfast wasn't necessary since I had finished off my remaining bread and peanut butter at the campsite. At the Purple Space Monkey I once again ran into my fellow travellers, 2 of whom were also catching the 10:00am water taxi. 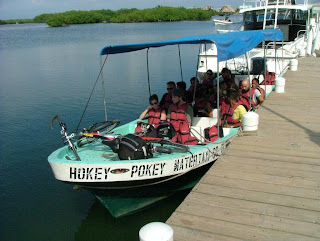 
US$6.50 later my bike and I were on the fully loaded Hokey Pokey water taxi. I was impressed by their safety consciousness. We were all required to wear flotation devices. The captain loaded my bike very gently and professionaly and then promptly dumped another bike on top of it while I watched in horror, expecting my derailleur to get bent into a pretzel. But the old mule survived the trip.

It was now 10:30 on the other side and I had low expectations of how far I would go. Luckily the skies were overcast and the road was flat. This was the most solitude I've seen so far. It reminded me a lot of back home. Even the pine trees with the hills off in the distance reminded me of lonely wild stretches of road in BC. Here I was to experience for the first time the small Maya villages unaffected by tourism. 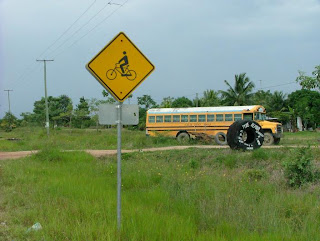 Watch Out For Cyclists in Bella Vista Town.


Cycling through the town of Bella Vista I passed Maya women, children and men. Most of them greeted me with broad smiles and friendly hellos. Three children on two bikes, including Elvis, followed me down the road and we chatted about their villages. I asked for a store to buy water and was told that there weren't any. The older girl offered to take me to Elvis's house to get some well water. I cautiously filled a small disposable bottle and kept it for an emergency, knowing that I had a water filter with me. More lonely stretches of road greeted me along the way. Sometimes I saw no motor vehicles for 20 minutes or more. In a typical demonstration of Belizean friendliness, a driver stopped to check on me while I was lubing my chain. I had planned on cycling to Medina Bank, the only town on the map before Big Falls. When I arrived I realized that it conisted of only a few houses with mud floors and no accommodations. I found a store, run by the Ikal family, that sold pop and they let me take some water from their pipe. I was only going to use it in an emergency, in conjunction with the water filter. There I met the cutest little Kek'chi girl, Tanisha. She was quite the little charmer as was the whole family. Permission to take a photo was politely declined. 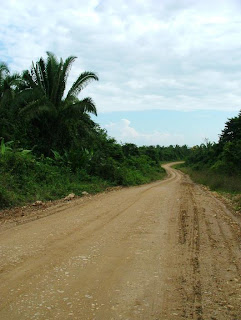 The Southern Highway Towards Punta Gorda.

Then the pavement ended. Not only did the pavement end but the road turned into a seriously bumpy, narrow dirt affair. I knew the pavement was going to end but I expected a wide gravel "highway", not a tortuous, twisting, hilly, bumpy excuse for a road. But I must admit that the lush scenery and the smiling, friendly villagers more than made up for the sore bum. Children could be heard laughing in the yards and many of them were highly amused at the site of the great white tourist on her fully loaded bike. A driver heading the other way stopped to chat and recommended I go to Peter Aleman's hotel in Big Falls. On this rough stretch I once again interacted with a "non tourist oriented" local. Those are my favourite encounters. They want nothing from me and we're just having a conversation. I had stopped to rest in the shade and breeze near a subsistence farmer's hut. He came out while his spouse watched from a distance with a little baby in hand. A horse was grazing and neighing behind the fence and everything was simply peaceful. Victor was a refugee from El Salvador who fled the war and violence there some years ago to find a more peaceful life in Belize.

On I rode accompanied by bemused grins, laughs and encouragement from the villagers along the way. I pulled into Big Falls and was presented with two options. The Lodge at Big Falls for $150US or Peter Alemans dusty, musty, cobwebby hotel for US$16.50. Of course I chose the latter. My last remaining rum had leaked into my panniers and no rum was available in the village. I made do with two Belikin Stouts and decided not to hang around this musty, rumless village too long. Walking around I saw what I thought to be a tourist. She turned out to be the owner's daughter who was now living in Chicago. No large containers of water were available so Ruth, the daughter, gave me some water and some bleach to clean out the container with the well water. That night the skies opened up again in a big way and I was sure happy not to have camped that night. Tomorrow I was going to leave early to finish the 30km into Punta Gorda.