At the crack of dawn I was up and raring to go. We headed to the lancha (launch) at 9:30am and started the 2 1/2 hour trip up the absolutely stunning Rio Dulce. All this cost a whopping US$12, including the bike. There are no roads going into this area but there are little hotels, shops, and little stores. They simply use the river as their highway. We stopped at a hotspring beside the river and soaked for a while. Then it was on to a little shop for an overpriced $0.50 coconut. Along the way the river wound along dense jungle with vines dropping into the water, limestone cliffs towering above us and birds all over the place. Some of the birds were even getting jiggy with each other. 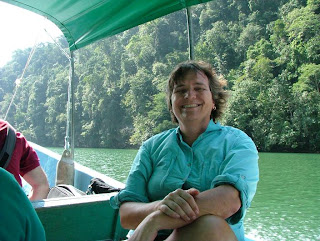 Up The Rio Dulce, Guatemala. 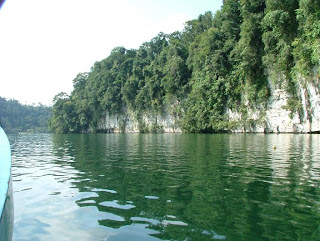 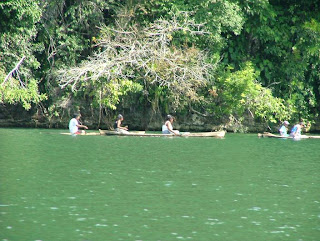 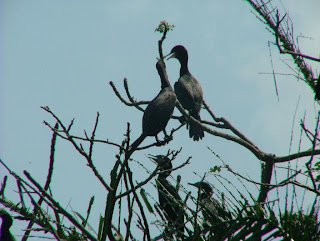 Birds Getting Jiggy With Each Other.


Rio Dulce, the town did not hold much interest for me. I was thinking of staying but decided to move on. Before we could even get out of the boat representatives from the two bus lines jumped on us to try and sell us on their services. There was the luxury Linea Dorada and the regular Fuente Del Norte. Fuente Del Norte did not guarantee a seat and they insisted on charging for the bike. I was told that we'd all have to take turns at sitting for the 5 hour trip. Total cost 80 Quetzales (just over US$10). Linea Dorada took my bike free of charge, guaranteed me a seat, took only 3 1/2 hours for the trip in an air conditioned bus and charged me 100 Quetzales ($US13). Guess which one I chose. I had time for a monster quesadilla and a fruit drink with some sneaked rum from the store. 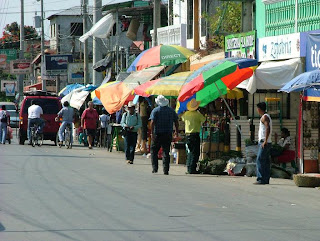 The Town of Rio Dulce, Guatemala.

I came into Flores, 210km north of Rio Dulce, after dark and was besieged by "free" shuttles to the various hotels. I guess they figure that once they've taken you there you'll probably stay. Walking to the far end of town takes about 15 minutes. I told about 3 of them that I had my own transportation and they backed off when they saw the bike come off the bus. I was actually in a bit of a foul mood from lack of sleep and my stomach had been acting up a bit. I ended up staying at the Hotel La Union for US$8/night. Clean beds, private bath, warm shower. A beautiful fresh breeze was blowing off the lake and it felt like a cool summer evening back home. Unfortunately none of that breeze made it into my room. Til late at night the drunks in the building next door kept going at it. Then at 6:00am (sunrise) noise reverberated from the street. At 6:45am sharp the thumping music started from across the street. At 7:00am sharp I was all packed and looking for a way to get up to Tikal without wasting one further moment in this town.

Off I went to try and find the famed $3 collectivas that apparently made the trip to Tikal. I made the mistake of checking with all the tourist oriented operations. They all shuddered in horror when I mentioned that I had a bike. One was willing to take a reservation but I'd have to show up and hope that the van had a roof rack. I finally found a van with a roof rack run by a larger company. Even by pointing at the picture of the roof rack in their promotional materials, I could not convince the office drone that taking the bike would not be an issue. She simply stated that I can't ride my bike in the site anyway. I pointed out that I wanted to ride it back from Tikal and not in the site and she simply shrugged her shoulders. A taxi driver who had approached me earlier that morning, and offered a US$20 ride to Tikal, walked all over the town to find me in an internet cafe and announced that he had found another passenger and that now the ride would only be US$13. Still pretty steep for the 65km ride in Guatemala. I was ready to get out and accepted the offer. He was good enough to wait while I got some coffee and even took me to a store to buy a tarp to replace the one I had forgotten back in Belize.

Entry into Tikal is 50 Quetzales ($6.50). I set up camp under a palapa for $4. Then it was off to visit the ruins in the afternoon. Words simply cannot describe this place. One can spend all day here and not really soak it all in. But I did the best I could with the limited time I had. Being the turista savvy gal that I am I decided to visit the "less important" ruins first, hoping the the turistus autobus obnoxius would not be a threat later in the evening at the major sites. It worked out to some degree. First I clambered up Temple 4 while listening to a bunch of obnoxious Americans shouting, hooting and hollering each time one of them made it back down the steps/ladders from the pyramid. The roar of howler monkeys was coming from behind the pyramid, right behind a "do not enter" sign. Suddenly I did not speak any Spanish and I followed the others who had gone in before me. The workers, for whom the sign was put up in the first place, welcomed us and pointed out the monkeys for us. What puny little creatures for such a fierce roar. Not being a tour bus turista I took my time soaking everything in while waiting for turistus americanus obnoxius down below to leave. 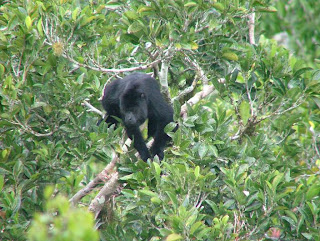 
After the cry of the turistus autobus obnoxius faded off into the depths of the jungle I trepidatiously headed back down for a more peaceful tour of further ruins. Next was "Mundo Perdido", my favourite. There I observed spider monkeys doing their monkey business in the trees, toucans hopping about, ocellated turkeys trudging along, woodpeckers a pecking and too many others to name. The top of Mundo Perdido is not much but from there you look down onto the jungle canopy and see the birds flitting about. I loaned my binoculars to some very grateful Chilean tourists so they could see the toucans as well. Others came up the pyramid as well. Only when another small group of Americans came up did it become noisy again. Once on top they promptly started to shout back down at their friends. I turned around and said "hey! serenity please!". They apologized and went back down. Luckily I had read the Tikal rule book before heading in. I was fully versed with Tikal's "no shouting" rule to respect the site :-). In hindsight I should have said it in Spanish for even better effect. This is where I sat for about 45 minutes to soak it all in. I even walked barefoot on the ruins. Maybe I'd pick up some Maya energy or something. 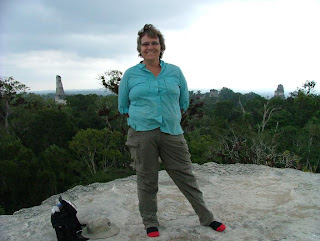 On Top of Mundo Perdido.


The howler monkeys in the distance and the other jungle sounds lulled me to sleep that night. Tomorrow I was thinking of going to a remoter site 23km north of Tikal. Uaxactun lies along a dirt road passable only by high clearance vehicle. No public transport is available for day trips. One has to go in in the afternoon and come out first thing in the morning. That means staying 2 nights or hiring an expensive private jeep to take you in.