The decision had been made last night and I was going to take the boat over to Guatemala. A competing boat service solicited me and I ended up going with "Memo's" since he was going directly to Livingston. Two Germans, a Honduran, and the lesbian couple from North Carolina joined me for the trip. We hefted the bike fully loaded into the "Dory" and pushed off after paying our US$3.75 exit tax. I was still not feeling well and a headache was starting to creep up on me. But I managed to take in the beautiful feeling of just being out at sea. Very far from shore there were local fishermen in dugout canoes, looking after their daily catch. A rather serene picture with the calm waters and the hazy mountains of Guatemala in the background.


Livingston, Guatemala was in stark contrast to sleepy PG. The streets were bustling with tourists, locals, shops, cafes and restaurants. We hadn´t even taken our bags out of the boat when were set upon by hustlers trying to arrange boat rides up the Rio Dulce. Now that my Spanish is not quite as laughable as it used to be I was able to hold my own and they politely left me alone. Up the steep hill we went, huffing and puffing to Migracion to legally enter the country. We were asked one question, "entrada?" ..."Entry?". He stamped our passports in a rather friendly fashion and patiently assisted me with my queries about bandidos, single female cyclists, etc, on the road up to Flores. I was advised that nothing was going on these days. I'm pleasantly surprised at how well I understand the Guatemalan´s Spanish. 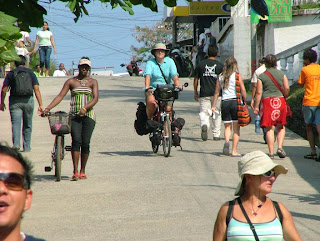 Tonight I'm living in the lap of luxury with my own cabana at the Casa Rosa, by the water for 150 Quetzales (US$20/night). I'm certainly not going to splurge like that too much in Guatemala. I could have gotten something for 30 Quetzales ($4) or my own cabana with private bath for 60 Quetzales ($9). But the pot smoking hippies loafing in the Gazebo weren´t exactly my kind of people. 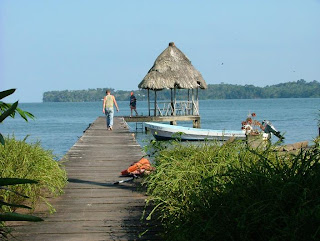 
As I innocently sat sipping a Caipiriña, the sourest rum drink you can get, Leynae, whom I had met in Belize walked by. Before I knew it she and her friend Amanda dragged me to some little restaurant, through the darkness, to the end of town. We loafed in hammocks with some Brahva beers with nothing but dirt floors below us. The ubiquitous dogs were milling about under the hammocks, and there is where we met some little imp and the birdman of Livingston. We all had a meal consisting of rice and exquisitely prepared vegetables. I think we were the first North Americans that place had seen in a very long time. 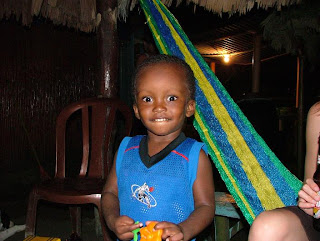 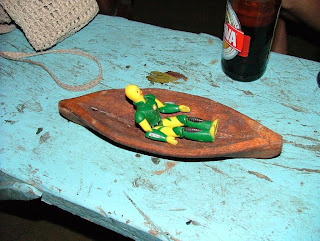 The Birdman of Livingston.

Looks like your havin' fun. Yes, Belikin does heal all aches LOL!

Brings back fond memories... Have fun in Guatemala - they are an awsome people.