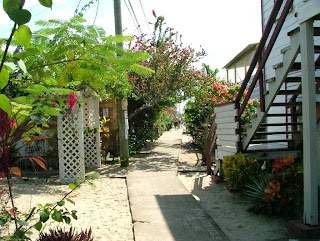 The "Sidewalk" In Placencia.


Ah! Placencia. Touristy, backpacker haven, alternative arts crowd, expats, everything rolled into one. I loved it in spite of my reservations about the influx of big money. Placencia has the longest uninterrupted sidewalk in the world. One mile long from what I've been told. It was really cool to just walk along amongst the little shops and restaurants. Once again I was able to just walk around without being hassled by anyone. I was quite taken by the village and scores of locals simply greeted me as I walked past.

I was in need of a nap so I returned to my house. The nap was not going to happen. Throughout this country there are many little shacks that seem to be falling apart. But from within you can hear some kickass stereo system thumping away. I guess as long as it doesn't rain on their stereos they're happy. I had already packed that morning so I hooked everything on the bike and walked the 200 metres to "On Da Beach Campin", run by a couple from Portland, Oregon. I stored all my stuff, grabbed my flashlight and went back to where the action was. 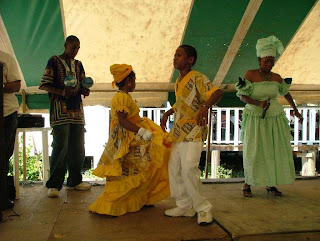 Leelaa Vernon With Her Grandchildren.


I was fortunate to be able to take in one of Belize's more famous singers, Leelaa Vernon. She entertained us with Paranda, Brukdown and others, along with her grandchildren. The passion in her voice kept me attentively listening. A lot of cute children were also performing as part of their school dance teams. 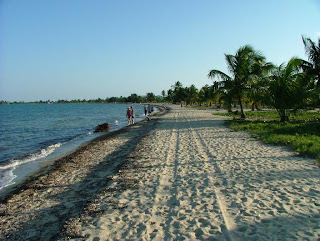 
The cool breeze gently blew away the excess heat from my body, as I lay in a wooden lounge chair on the beach, pink lemonade in hand. This was simply an evening of loafing and having a couple of rum drinks. I had left one of my tops behind in Hopkins and was trying to find a decent top in the stalls along the sidewalk. No luck. They simply weren't made for women who loom as large as I do.

Off I went to "Da Shack" for my first veggie burger in Belize. It was made from fresh tofu, grains and vegetables. Rather tasty for a desperate vegetarian like me. Back to the Tipsy Tuna for another libation and meeting up with the other travellers. Then early back to the campground so I could go snorkeling the next morning. I arrived at the campsite and went about setting up the tent at 10:00pm while trying not to wake the other campers. I was told that no one heard me coming, in spite of having the owner's bike come clanging down as I took my stuff out of storage.