Cycled 49km
Uaxactun and back

I knelt with my bum sticking out of my tent trying to decide wether cycling to Uaxactun for a day trip was the right thing to do. Suddenly I thumped my hand down on the tent floor and said "that's it, I'm going!". I packed up one pannier with emergency medical supplies, extra clothing in case I got stuck overnight and all the water I could carry. Off I valiantly marched to the ticket office to see whether there was a fee to go through Tikal in order to get to Uaxactun. The horrified ticket clerk told me that I really shouldn't do this trip alone by bike. There were SNAKES! he warned. Snakes on the road? I mused. Would they run after me and nip me in the heels I thought? During the day? Do they lay waiting in the bushes ready to pounce on silly turistas who venture out alone? There were DANGEROUS ANIMALS!! he uttered in sheer terror. Wait a minute I thought. What animal in Guatemala attacks humans unprovoked? What if something happened to me along the way? he asked. There would be no one to help me he cautioned. I firmly uttered that I'm an experienced hiker in the backcountry back home and he quickly retorted "but that's something you're familiar with". My only real concern was with bandidos and he advised me that wasn't a problem. He wouldn't back down but he was obliged to tell me that I needed to get a government permit first from the adminstration office. At the office I inquired once again about the dangers and was told that there weren't any whatsoever. Two gringo researchers outside laughed at the animal warnings but did warn me about Chateros (itinerant leaf collectors) who chased them. Then they acknowledged that it was in a remote part of Belize, not on the way to Uaxactun. They also acknowledged that the military had been in a week ago and chased everyone out. By now I was in a testy mood and simply smacked my 15 Quetzales down on the counter at the ticket wicket and asked for a Uaxactun entry ticket, much to the displeasure of the ticket guy who had tried so hard to dissuade me from going. What could he do? You simply can't dissuade a stubborn scrabblebiker of German ancestry.

Up the bumpy road I went, weaving between startled turistus autobus while heading to the turnoff from inside the park to start the 23km northbound trip. No chateros in sight but lots of rustling sounds in the bushes from birds and monkeys. The jungle canopy closed in above me and I rode in the shade, seeing the branches suddenly move on both sides of the road from monkeys jumping across. The road turned out to be no worse than many of the logging roads I'd used back home in BC, albeit not passable in a regular, low clearance passenger vehicle. I walked my bike across most mud spots since that fine tropical mud is as slick as ice when wet. One mud hole looked doable ...oops, it wasn't!. The back wheel went out from under me as I slipped into a tire rut. I could not unclip my cleats and my left knee came sraping down into the mud. Now I was covered in mud and using my precious water to wash it all out from the road rash covering my lower left leg. The nice lady running the Hotel Chiclero in Uaxactun later gave me some disinfectant just so she could watch me scream in pain after I put it on.

The first people I saw were not bandidos, chateros or vicious snakes. They were some of the friendliest villagers I had met so far. I had arrived at the dusty sleepy little town of Uaxactun, population 400. These people used to collect "chicle" from the chicle trees for chewing gum before they started using synthetics. Now it's just another dead little village with chickens running around and dogs sleeping on the dusty paths. An abandoned airstrip bisects the village since the airplanes stopped coming when the chicle market went down.

Uaxactun was nothing compared to Tikal in terms of scale and scope. Just a few smaller but excavated ruins amidst the most peaceful setting I'd encountered yet. No turkeys roaming here. Only horses grazing amongst the ruins. There was not one single tourist present except me. Just perfect. I knew it was a 2 hour ride back and I wanted to give myself extra time in case something went wrong. So I only had 2 hours at the site. On the way back I had a big spurt of energy and rode the hell out of the bike for a real mountain bike experience ...albeit on a road where I had seen a pickup truck, a junk food delivery truck and two local buses. When I returned to Tikal the ticket control guy met me with applause and the armed guards at the entrance met me with scowls. How dare I come back alive after all those warnings :-) Well at least I did lose my front fender and broke a water bottle cage along the way. I should have gone back to tell them to make them feel better. 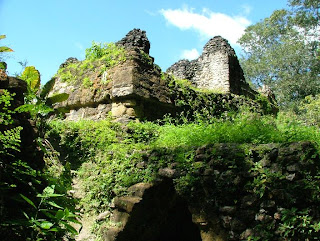 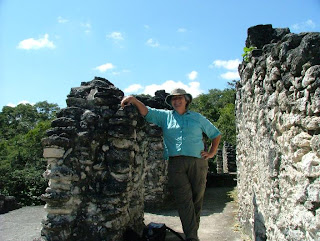 Atop a Ruin at Uaxactun.