Holy cow! It's actually warm today. I could cruise down the transpeninsular numero uno at 140kh/h with the windows open, without freezing to death. After having had days with maximum temperatures of 15-16 degrees celcius, and 11 degrees at night, this is simply wonderful. It should get close to 20 degrees today. The cold outside and the cold inside of me are both gradually vanishing. Soon, I'll be ready to do what I came down here for, some cycling. 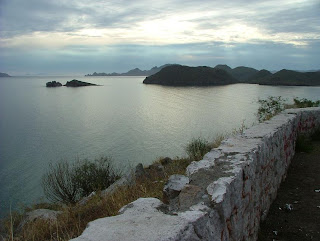 South of Puerto Escondido.
Before starting to head inland.
Still part of the Sea of Cortez.

Driving on Mexican roads is a thrill in of itself. Speed limits mean nothing, and my average 120km/h in 80km/h zones meant that impatient Mexicans were constantly barrelling up behind me and passing like I was standing still. The roads are good, but that's a bit extreme even for me. One woman passed me and I decided to try and keep up. I had it up to 140km/h and she still left me in the dust. A shortlived stint of 160km/h didn't seem to make any difference either. I'm not sure what shocked me most ...how fast that woman was driving, the fact that I tried to keep up with her, or the fact that my little 1.1 litre tin can could actually do 160km/h and still feel reasonably smooth.

Dusty Baja towns came and went. All were very friendly, with none of the Latin American machismo that can be so annoying to single women going into Central America. I was basicaly left alone ...just the way I like it. I'm now in Puerto San Carlos, hoping to see some grey whales. On the paved road into town, the desert became even greener than before. Pretty little flowers lined the roadside and surrounding desert. Yellows, pinks, and whites all over the place. Nicely contrasted with some strange brown lichen growing on the shrubs ...this is apparently a high fog area, and I'm assuming the source of moisture for the lichen. I simply soaked in the pretty scenery and visions of Patti entered my mind. My 120km/h reverie was rudely shattered by the sudden apparition of a Mexican pickup truck within one car length of my rear bumper. Before I knew it the Mexicano loco had passed and was out of view in front of me.

Puerto San Carlos, on the pacific side of the peninsula is devoid of tourists right now, and that surprises me to no end. No real campsite, only empty hotels all over the place. This is where the grey whales come to calve in the winter, before migrating back up to Alaska for the summer. I would have thought there would be more tourists here for whale watching. As I sat in the car looking at the guidebook, two young men in a VW Jetta pulled in across the road and offered to lead me to an RV park. Of course he just happened to also be offering whale watching tours. I followed them in this small village, always keeping track of where I was and knowing that I can outdrive just about any Mexican ...well, more or less. The RV park was closed and I got his phone number, just in case I decided to go for a $200 whale watching excursion.

I cruised the bumpy sand roads of Puerto San Carlos for a few hours, trying to find a reason to stay. The village had its' own dusty, ramshackle, frontierlike charm. But it was essentially dead right now, and a bit depressing with nothing to do. Probably too early in the whale watching season.

Soooooo, off I zoomed back to Ciudad Constitucion, once more taking in the pretty flowers along the way. Tonight is a vegging night in a hotel. I finally get to lie on a bed and watch Los Simpsons, en espanol. Tomorrow, it's on to La Paz to drop off the little tin can and do something a bit more active. 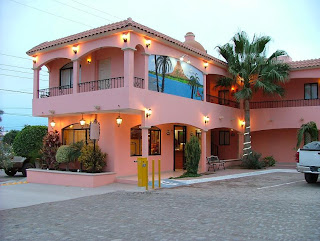