La Paz to La Ventana.
55km's on Pavement by Bicycle.


I just had to tear my butt off the bed to turn off the Bugs Bunny show in Spanish. It was time to finally hit the road by bicycle. I barely had anything to drink the night before, yet I was slow as molasses in getting my gear together. I finally made it out the door an hour later at the crack of 9:00am. 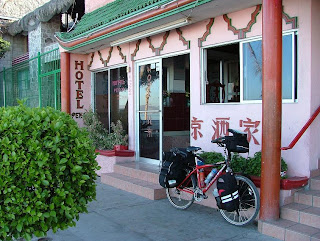 Getting Ready to Leave the Hotel Nuevo Pekin.


But of course I don't function without coffee, so I came to a screeching halt in front of the little cafe to get my wake up juice. I managed to talk to a nice retired Danish man, who used to do a lot of bicycle touring as well. I had to try and listen intently due to a loud American who was shouting a conversation to a German fellow at the next table. I had decided to be on the road by 10:00am and was very close to realizing my goal. That's when Kelly and Tanya walked past. The two Canuck cyclists I had been in contact with and who I ran into in Bahia Conception. I finally hit the road close to 11:00am. 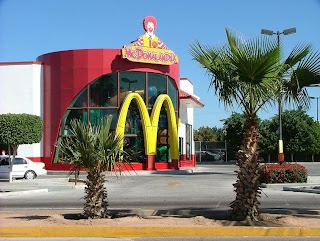 What Can I Say! It's Everywhere!
Exporting America's Crap to Unsuspecting Nations.

Getting out of La Paz was a job and a half. It took 30 minutes to finally hit the country road for La Ventana. Mexican drivers seem to lack the hostility towards cyclists, which is so common back home. But they'll still mow you down, just without the hostility ...only half kidding :-)

I had once more chosen the road less travelled. This time it was a paved one. Little did I know that it would be an ass busting 22km uphill climb as soon as I left La Paz City limits. Oh sure, there were a few flat sections of about 200 metres each, as well as a few gentle downhills, perfectly designed to give you some hope just before the next hill comes into view around the corner. The road surface was downright crappy for cycling as well. In other words, major rolling resistance. I kept scanning the desert for a spot to camp, just in case I couldn't make it to La Ventana. The peaceful desert setting did make up for the grind.

Mexican drivers are such a mixed bunch of people. Many a friendly toot greeted me, and many drivers put their four way flashers on as they disappeared in the distance ...to warn other drivers up ahead or behind. Then of course there was one oncoming pendejo "asshole" who decided to pass another vehicle with me coming at him and no place for me to get off the road. I just hugged the gravel ditch, shook my head in disgust, but didn't have the time to give him the customary aerodynamic wave. He never once flinched as he sped by within about 12 inches of me. 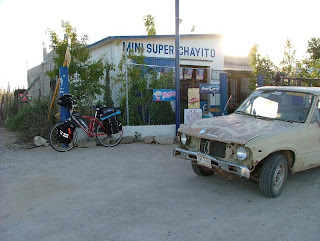 Rest Stop Near La Ventana.
with one of Baja's fine camionetas in the foreground.

The landscape was downright beautiful once more. Looking back down, I could see the bay in which La Paz sits for hours on end. I finally made it to the top exhausted and then froze my butt off on the 12km downhill with the sun starting to hang quite low in the sky. Now I had no choice but to head to La Ventana, a slight detour, since that was the only place with accommodations nearby.

I tiredly stumbled into La Ventana and found a large colony of wind freaks. They're all camped out here to wait for that perfect wind for windsurfing, kiteboarding, and whatever else one does with wind. They're pretty much all Canucks and Yanks. So I set up my tent in an arroyo, hoping the fee collector wouldn't be around again tonight to collect the rather outrageous $8.00/night. 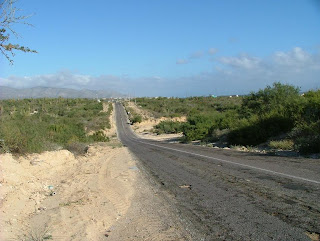 This is What Passes For a "Paved" Secondary Road.
Heading Into La Ventana.
The Main Highway is Actually Quite Good.

OK, we'll see how tomorrow goes. I'm not completely worn out from this little climb, so I should be able to do some more in the morning.