Grinding Along to El Cardonal

La Ventana to El Cardonal
55km's by bicycle. Mostly on dirt and sand.


Today I had vowed to leave town by 9:00am. Much to my shock and surprise, I actually did. And that was after having a really good breakfast of Huevos Rancheros, orange juice and coffee. As I was getting ready to leave, a gringa turista walked up to the restaurant, took a look at my bike and me, and started quietly laughing uncontrolably. I wasn't quite sure what to make of that, so I hopped on the bike and pedalled off while hung over windsurfer dude types starting piling into the restaurant.

I already knew today would be tough, even though the book promised it would only be about 36km's to El Cardonal. As usual, "the book" was inaccurate. It was closer to 45km's. That may not seem like much, but it's a world of difference on a fully loaded bike after having to push the damn thing for 2km's due to too much sand on the road.

I was downright elated to be on a flat, sorta paved, road out of La Ventana. It's paved but so bumpy that I was sometimes whishing for some dirt instead. At least on the dirt you can often find some smooth tracks. I stopped into Los Planes to stock up on cheese, junk food and water ...it's a tough trip, I've been told. My crappy made in China front panniers kept bouncing off the rack and I had forgotten to bring bungy cords, my usual solution to the problem. I made a beeline for the first respectable looking ranchero alighting from a monstrous, shiny pickup truck. I used all my Spanish skills to convey the message that I was looking for a bungy cord in this small town of a few hundred people. It involved asking about "cuerdas elasticas" and many hand gestures attempting to convey the idea of hooks at the ends. He quickly knew what I was talking about and pointed me towards a "ferreteria" (hardware store) one block away. He headed off into the store where I had just bought the cheese.

While I was loading up the water, cheese, junk food, etc onto the bike, out came the butcher from the store and motioned with bloodstained hands to wait right there. A minute later he reappeared with a nice long bungy cord. I guess word had spread that some gringa was in need of some elastic cords with hooks. I asked him if he had another, after all I do have two crappy made in China panniers. He gave me a bit of an annoyed look and said "no, solo una". When I asked him how much I owed he just shook his head and made it clear that it was a gift. Now I felt like a complete dork for asking him for another one. It's a good thing I wasn't flying my Canadian flag, or I might have set Mexican Canadian relationships back a few years. Instead he probably just took me for some rude yank ...teehee. The one cord was long enough so I could stretch it over the forks and use it for both panniers. Secure in my knowledge that the panniers wouldn't bounce off, I set off down the road, awaiting with trepidation the end of the pavement and the beginning of a little adventure. 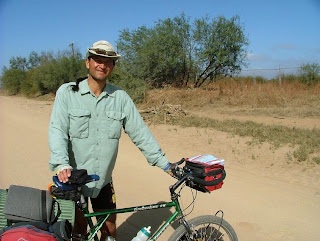 Peter, The Lone Cyclist From Calgary.


And there it was. Not really the end of the pavement, but a sign pointing onto an extremely sandy road. Unfortunately, the sing had the right town on it for me and I set off into the deep sand while the nicely paved road veered off to the left. Within minutes I almost keeled over and couldn't proceed in the sand. As I slowly tried to make my way forward, a strange sight greeted me from the other direction. That familiar lumbering shape of a fully loaded touring cyclist. Talk about good fortune!! This was someone who could tell me all about the road ahead. Peter, from Calgary, had camped in the desert the night before and reassured me that the sand would end just a little down the road. What he failed to mention was that just as you could sense El Cardonal at the other end, there would be km's upon km's of sandy roads to follow. 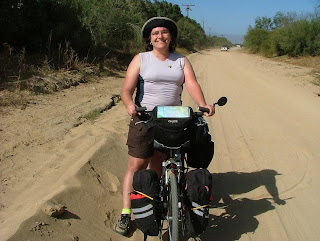 Yup! That's All Sand Down There.
Shortly After The Pavement Ends.

After leaving the pavement, the "road" climbs for about 6km's. A real cyclist might have been able to climb without pushing. But hey, I did a lot of walking and pushing and I don't care what anyone thinks ...phhttt!! The little one lane, rock strewn road twisted and wound its' way along the contours of every little nook and cranny. Once at the summit, a stunning view came into focus. 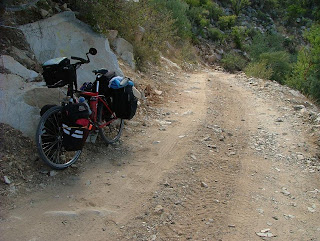 During the 6km Climb.


Once again, with every turn in the road, I found myself muttering "this is effing beautiful". Imagine something like northern California, take out all the people, the paved roads, the towns and villages, then add a bunch of cardon cacti. In the first 30km's of this ride I only saw one car. When stopped for lunch and numerous little breaks, all I could hear was the wind and the waves crashing against the shore way below me. 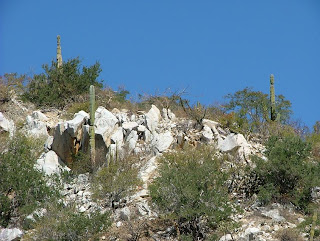 
The road dipped into many an arroyo, filled with loose sand and other nasty bicyle unfriendly stuff. I did finally drop the bike, with me still on it. The front tire took on a mind of its' own, wildly twisted from side to side, and just as I managed to stop the bike, completely gave out from underneath me. I gracefully plopped to the ground and the bike on top of me. At least the buzzards told me it was pretty damn graceful, and they are discerning birds. Not being satisfied with only one little crash I made a repeat performance only minutes later. This time the gravel was a lot sharper. I thought only my ego was hurt, until I looked at the little dots of blood forming on my right leg. Precious drinking water was used up to wash out the dirt. Actually, nothing serious. 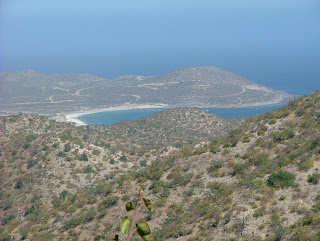 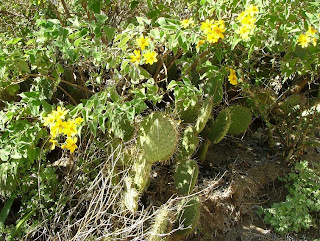 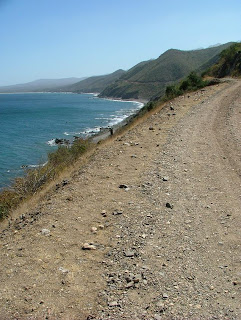 This is What Greets You All Along The Way.
Between Los Planes and El Cardonal. 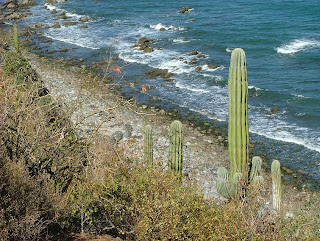 Stupendous Coastline For Kilometres on End.


Just like the day before, I pulled into my destination with the sun thinking about setting sometime soon. As I pulled onto a little stretch of pavement I was singing at the top of my voice "Hallelujah!, Hallelujah!". I'm now the only guest at the campground in El Cardonal. I feel a bit sorry for the people running it, it is a nice little campground. My little tent spot even has funky little home made light fixtures to illuminate the picnic table. It's so freaking cold, I can't believe it. The campground manager tells me he can't remember temperatures this low ...ever! 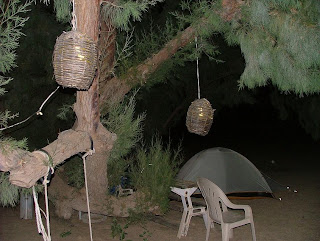 
I'm going to have to think hard about my plans for the next few days. I'm obviously not fit enough to cover long distances. The sand is also proving to be more of a challenge than I bargained for with my 1.5 inch touring tires. Well, at least tomorrow should be easier. There's a paved road leading out of El Cardonal to take me 23km's to Los Barilles, where I could just take the highway if I needed/wanted to. Don't get me wrong, I'm enjoying this trip.

Blogger said…
Need To Increase Your ClickBank Traffic And Commissions?