Today I decided to make it an easy riding day. Packed up and moved the bike to the "Beautiful Bay" trailhead. Strapped on the bear spray and 4" knife due to the sign warning of a grizzly sighting. Pretty interesting since Vancouver Island officially does not have any grizzlies. 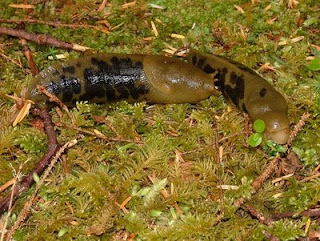 The trail winds its way through mossy second growth forest with occasional glimpses of and access to the pebble beach below. The forest had a fairytale feel to it and I was almost expecting to see a leprechaun or pixie jumping out from behind a log. As the easy trail got me to the halfway point I sniggered at the suggestion that the round trip takes 5 hours. After all, I've only been going for 45 minutes. I smugly continued and was immediately greeted with steep stairs heading down into a gully. Not a problem I thought. But the laws of physics of hiking are "what goes down must come up". I huffed and puffed back up the other side and still made it to the end of the trail in 1 hour 45 minutes. I had seen no one else on the trail all the way but there were two people at the end with their dog. Waves were lapping against the driftwood lined shore, the sea was calm and the odd private fishing boat coasted by. The sun had burnt away the morning's thick cloud cover and this was simply a little piece of paradise. 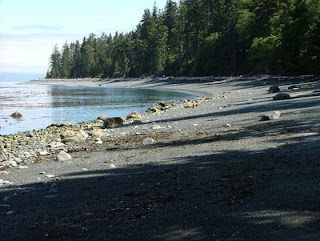 The Beach Walk Back.


Then I decided to try and catch the 1:40pm ferry off the island. I still had to get to Port Hardy before the stores closed so I could buy a new compressor and hopefully find another tube as well. Without some kind of pump I'm not heading onto remote logging roads. I'm sure BMW Roadside Assistance would have a hard time locating me down some dusty little logging road. 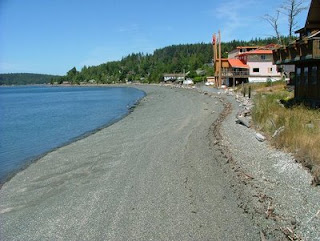 The walk back was along the beach. I started daydreaming and was just enjoying the walk, sunshine, absolute peacefulness and was back at the bike in just over an hour. Along the way I spotted a brown spot on the beach. A deer was calmly meandering along the beach. Out came the camera. If I could not see any Orcas then maybe a photo of a common deer would have to do. Then I realized that there was a fawn with the deer. I never got close enough to get any photos. 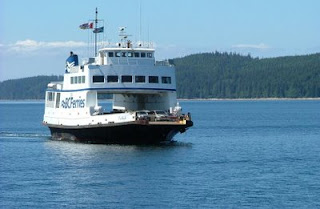 My Ride Back to Vancouver Island.


A short 50km ride into Port Hardy followed after going straight to the front of the ferry lineup. I simply love taking the ferries by bike ...no lineups :-) In Hardy, as they call it, I found a new compressor, stocked up for dinner and headed for the campsite. The only motorcycle store did not have my size of tube. I'll probably take a chance tomorrow and head to Cape Scott anyway. After all, I do have two patched tubes which seem to be holding for now.