The cool thing about the hotel I stayed at in Villa Ahumada was that it had a private garage which locked from the inside. Then you went up the stairs to your room. When I realized that I needed something from the bike I could just walk down without bothering to put my clothing back on ...hehe!

Exiting Mexico was very straightforward. 30km's before the border there's an aduana post and you need to stop to officially "exit" Mexico. You are then in the 30km "free zone" near the US border. After that you just drive out of Mexico and into the clutches of the US border people at any nearby crossing. Wanting to avoid Ciudad Juarez I headed west, planning on crossing at Palomas/Columbus. About 15km's out of Ciudad Juarez the sign said Santa Teresa, NM so I took a right turn. Within minutes I was confronted with fences and Mexican and US flags. I was at the border???? I thought it was another 100km's to Palomas! As it turns out, there was another crossing which I didn't know about. It's basically an opening in the fence with no town or settlement of any kind on either side.

After the two cars ahead of me cleared very quickly it was my turn. The very nice young female border guard simply "wasn't getting me". She couldn't understand why I spent time in Mexico and was riding to Canada. "Do you just like to travel?" she inquired. "yes" is all I could say. Where are you headed, she asked. "Canada" was my simple response. She ended up very confused and apologetically sent me for a full search in station number 2. An ominous looking orange sticker was placed on my fairing. I pulled into station numer 2 and three border people came out of the building. "Can we help you with something?" the hispanic one asked. I sheepishly informed them that I had been sent here with some orange sticker. They opened the cases and had no real interest in actually looking inside. They were more interested in my trip and the bike, but they too didn't seem to understand what the heck I was doing travelling around like this. This only took a few minutes and everyone was very polite, friendly and courteous. But it was nevertheless the very first time I'd been asked to open my cases at a border crossing ...after having been to every single country in North and Central America. 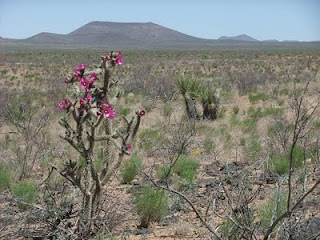 
I had been wondering how I would feel after crossing back into more familiar terrain. I immediately started feeling drowsy when I started along the beautifully smooth secondary road along the Mexican border in New Mexico. I had gone from semi chaos to something almost strangely orderly. Each time I saw more than one car coming the other way I was bracing myself for someone passing dangerously into my path. Each time I saw a vehicle comming towards the highway from a side road I prepared to swerve into the other lane, expecting them to not stop and just pull onto the road in front of me. The oncoming drivers made no attempt to recklessly pass and the drivers coming from the side courteously stopped and made sure it was safe to proceed without killing anyone. How bizarre!! 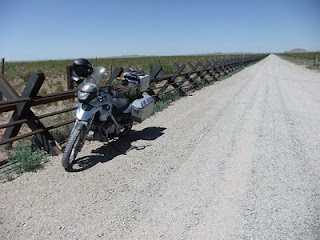 
This is when I started realizing that my guard had been up throughout much of this trip while driving. I was now back in familiar territory and beginning to realize that in spite of a few potential idiots, things were pretty civilized again. With my guard lowered considerably I was starting to feel comfortably at ease, thus starting to become drowsy. Nothing like a little photo op stop along the border fence to take care of that.

I spent the night in Silver City at the house of a friend of a Horizons Unlimited member. They were both very wonderful human beings and made for some extremely interesting conversations. No shallow small talk here. More like talking about religion, quantum physics, the bible, 2012, politics ...but not sex. This was one of the quietest nights I've had in a long time. 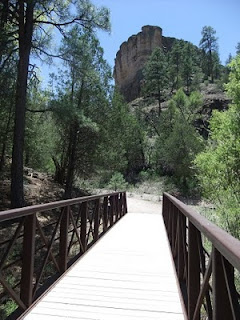 The Gila Cliff Dwellings Are Up There 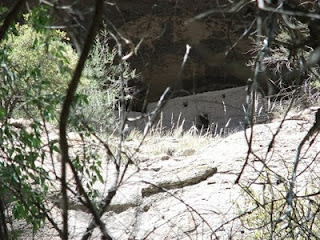 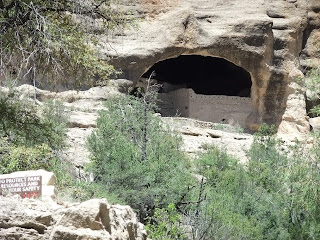 
I no longer have to ask if the water is potable and I'm remembering that the used toilet paper does not go in the basket beside the toilet anymore. Having been absent for a while really is making me appreciate how good things are for us. So quit yer freakin' whining and be grateful for how fortunate we are to even be able to afford to go on motorcycle trips and having shoes on our feet. 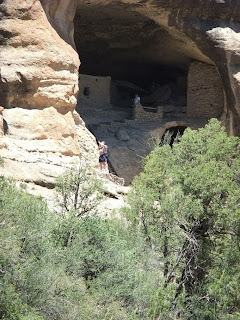 
This morning (Tuesday) I received the news that I had to be back in Victoria on June 2nd. This gives me 8 days to cover close to 3000km's but that's life.

Since I'm down here I simply had to see the Gila cliff dwellings. A twisty 60km long road leads to the site and then you have to walk in due to a flood damaged bridge. It's only a 5km walk, return and very much worth it. The caves are a wonder to behold and the little hike in of itself is a nice little peaceful treat. There are many theories as to why these people built their dwellings in caves high up the side of a cliff. But I've solved the mystery. They were simply tired of the horrible summer heat and loved the perfectly chilled climate they found in these caves. 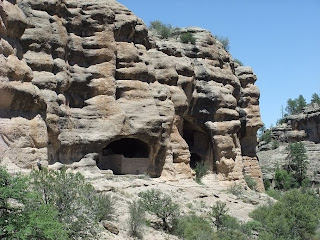 
Now that I have a "goal" of getting home quickly I'll have to skip Colorado and take a more direct route through western New Mexico, into Arizona and the Grand Canyon, then north through southern Utah for the famous landcapes, and then Interstate it all the way back home very quickly after getting a new tire in Salt Lake City, Utah. So it's now about deciding how to us my time most efficiently. 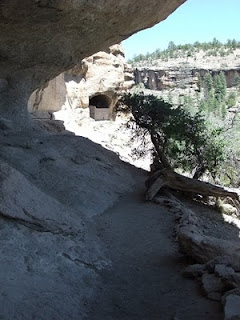 
Ironically I was actually quite excited when I learned that I had to be back in 8 days instead of the planned 18 days. I guess that means I'm ready to be back home now, in spite of being a bit sad that the trip is coming to an end and that I won't be able to see some of the things I had hoped to see. Just another excuse for more trips I guess :-) 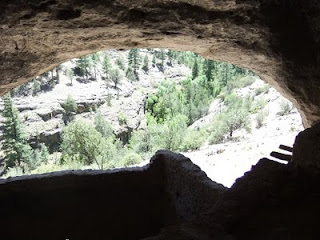 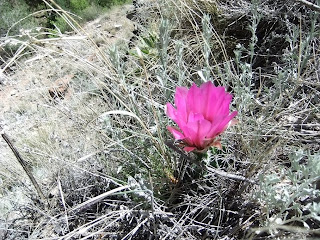