It's been a long day and I had gone through Burley, Idaho looking for a motel for the night. It's hard to imagine that I was using my electric vest to try and keep warm. Suffice it to say, taking the road less travelled can be a bit demanding in spite of being much more rewarding than sticking to the Interstates to hang out with the semis and RV's.

The driver in front of me was excruciatingly slow and I finally decided to go around her in the dual turn lane to my left. No sooner had I done it and I realized that the car coming the other way was a cop car. A quick check of my mirror and my suspicions that I wasn't about to be left alone were confirmed. Soothing red and blue lights gently followed me into the mall parking lot.

"How are you doing?" said the very nice officer. "Pretty good" I responded with a sheepish smile. "I sure picked a bad time to do this, didn't I?" I added with a resigned look on my face. I was let off with a "Please, please, please don't do this again" warning. After about 23,000km's my luck is holding up. I guess it also pays to have a squeaky clean driving record as a professional driver.

It's now time for a motel. I was supposed to meet up and stay overnight with Joe in "Twin Falls". Finally after mud splattered Ellie and I were safely at the motel I managed to call Joe to apologize for not being able to show up. Too tired, long day, pulled over by cop, were my excuses. But hey! let's meet for breakfast when I come through Twin Falls in the morning I suggested. "Uh, I'm in Idaho Falls". Doh!!! I'd been pushing myself just to get to the wrong city. It's a good thing I didn't just show up in Twin Falls. I suppose my first clue should have been that his street didn't show up on Mapquest in Twin Falls. We had a few good laughs on the phone about this. 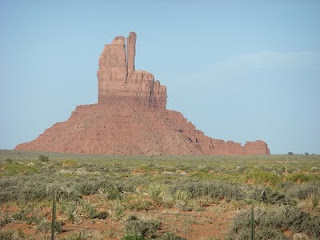 Heading towards Monument Valley Mother Nature demonstrated her superiority by kicking up some pretty nasty winds. "Warning, areas of blowing dust" said the highway sign. No kidding! Ellie and I were leaning perilously to the left, into the wind, as dust was being kicked up all over the place. 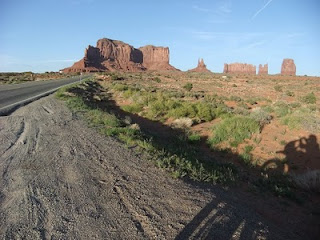 
With the setting sun and the wind easing off a bit, Monument Valley was awe inspiring as the evening light brought out all the vivid colours. 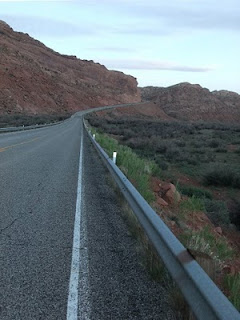 
This is now major tourist country and Memorial Day Weekend is approaching. Not being a United Stater, I had completely forgotten about that one. Can't they just celebrate Victoria Day Weekend, the week before, just like us Canadians? ...I guess not ;-) After all, they don't really care all that much about some dead British queen. Basic and below basic motels were charging an arm, a leg and a variety of other body parts. So I opted for the $10 BLM (Bureau of Land Management) "dry" campsite. No, that does not refer to alcohol. 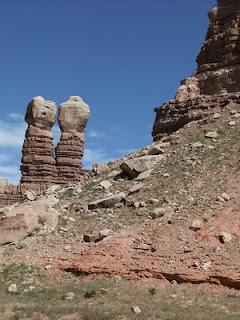 
My tire was now so worn that the tread was basically gone. Still OK on a dry road but rather insane should I continue and encounter some rain. I was also not taking any dirt roads due to the tire's condition. I called the BMW dealer in Sandy and was actually told that I might find a tire in Moab. Moab? I thought it was just some small town flooded by tourists and mountain bikers. Fred from Arrowhead Motorsports spent a fair amount of time showing me the 6 or 7 different options in his little shop beside his house. Wow!! All available in my size as well. I opted for the Avon Gripster, to try something different, and he installed and balanced it on the spot. So I headed off to a $79 motel, the type that would normally charge about $40 if it weren't in some tourist town. Then off to the local brewpub to throw back a couple of cold ones while chatting with two youngsters from Chicago and Phoenix ...ok, they were 28 years old but I love pretending to be an oldster now that I'm creeping towards 50 :-)


I took the scenic road and on my map I saw a dirt road connecting up to Canyonlands National Park. A sign pointed to Jug Handle Arch Trail parking area. So off I clattered, literally, along the rocky, bumpy "road". When I came to that little arch (in the above picture) I spotted some rather jagged and rim mangling rocks on the road. I kinda panicked and came to a quick stop on the steep uphill ...bad decision! Both feet went on the ground rather quickly and I applied the front brake after stopping. Of course there was very little weight in the front and the dry, packed, dust covered road surface didn't offer much in the way of traction. So backwards I slid with no way to stop except to deliberately drop Ellie on her right side while bailing myself. OK, now Ellie has matching bruises on both sides. This was my turn around point since I didn't even know where the heck this road was going.


I'm now on the dirt road which actually shows on the state map. This kind of road simply wouldn't be on a regular map back home. But hey! the scenery was stunning beyond words. The road is quite doable but it is not for the faint of heart. Not technical, just very bumpy, narrow and switchbacky (just made up a new word). The Jeep and 4x4 drivers were pretty awesome. They pretty much all pulled over to let me pass.


Canyonlands National Park, Shafer Road ...from where I came.


The road then leads right up to a box canyon. How in the world will this road continue? I asked myself. They somehow managed to dig out switchback after switchback to make this little "road" huff and puff all the way back up to the plateau to reconnect with the paved road in Canyonlands National Park.


I had now come full circle back to Moab. Arches National Park is a must, in my humble opinion. The $5 entrance fee for motorcycles is well worth it. I would have loved to stay a few days and hike around but Great West Life was calling. Must be home for my June 2nd appointment.


The winds were fierce and gusting up to 100km/h. This made for some interesting riding. Believe you me!

The rest is best left up to the pictures. Enjoy! 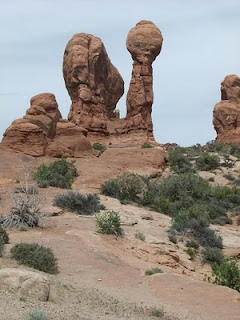 
Staying in Moab wasn't really an option. Even if there was availability (all campgrounds were already full days before the long weekend), it was priced beyond what I was willing to pay. So I rode on for another few hours and settled down in Wellington, Utah.

"I have a room for $54" said the rather jolly and funny woman at the reception desk. "Do you have a Triple A discount?" she asked. "I have the poor motorcyclist discount" I replied. She laughed and gave me the room for $49.95 and advised me "You have the CAA discount, if anyone asks" (Canadian Automobile Association).

I inquired about the closest source for beer and she sent me to the gas station next door. But not before warning me that in Utah all beer sold outside of government liquor stores is no more than 3.2% alcohol ...what?? Sure enough, even the imported Mexican beer was basically beer flavoured water. I had to get double the normal amount just to be close to Canadian standards with our 5.5% normal beer. Just imagine, major national breweries have to put out special batches of beer to accomodate Utah laws ...or get around them. So in Utah you can ride without a helmet but heaven forbid you should enjoy a cold beer after a long, hot day.

I can see the Mormon dominated Utah legislature coming up with this.

So how can we prevent alcohol being sold outside of government stores?

Thanks guys! We can now produce even weaker beer than our normal US/Mexican versions and have our customers spend twice the money by buying twice the amount of liquids. And hey! it costs the same to produce weaker beer, so we're sure not going to drop our prices.

Let me get it straight.

I don't care about sports. Shame on me but I dont even know the football rules. Never cared less.

I tried everything from forex & stocks to internet marketing and affiliate programs.. I even made some money but then lost it all when the stock market went south.