I've now decided that this will be my "push" to get back into the US of A. My time is running out and I need a tire pretty soon ....kinda like several hundred kilometres ago. My best bet to get one is in the USA.

To start off my "push" in the most efficient way I got up at 8:00am and had a leisurly breakfast with three coffees and desert. At about 11:30am the bike was loaded up and ready to go.

"Click, click, click" went the starter. Absolutely no juice left in battery. I got someone to help me push the bike from where I had been boxed in by another guest. A nice little downhill roll and the famous clutch popping did the trick. Ellie sprang into life. The steep cobblestone roads in Real De Catorce are a bit freaky. The cobblestones have been nicely polished by the car tires going over them. On my final descent towards the tunnel, my tread challenged tire wasn't really willing to hold on to anything and I could feel the ABS releasing the brake as I anxiously looked at the little retaining wall straight ahead. But I made it.

I obnoxiously left the engine running while waiting my turn at the tunnel. I put on a defiant posture in case anyone complained about an engine running unneccesarily. But no one really cared. After all, this is Mexico.


Waiting our turn to head out of Real De Catorce

I made sure to be the first one through. On the way in I found that my headlight didn't illuminate enough of the tunnel and I couldn't use my high beams because of the traffic in front of me. On the way back dozens of pedestrians were making their way into Real De Catorce through the tunnel. Peace signs were tossed my way along with some hootin' and hollerin' as I roared past. The Leo in me went "Yeah baby!, here I am!"

The 23km cobblestone street back to the highway didn't faze me as much as it did on the way up. I stood up most of the way and my butt is thanking me for it.

Yesterday, as soon as I turned off towards Real De Catorce, the low fuel indicator came on. I'm not sure why my brain can't embrace the idea of "fuel up whenever you can". So this morning I looked at the map and saw nothing but tiny little hamlets along the way to my next destination. I brought my speed way down to save on fuel and finally had to concede that I would run out of fuel before any major town, along with a Pemex, would materialize. I was prepared to plead for some fuel when I pulled into some lonely little place which claimed to be a restaurant. Six Mexicans complete with straw hats were sitting on the steps out front. "Right here" was the answer I got when I asked about where I could get some gasoline. Ellie was quite happy again after receiving the contents of two 2.5 litre Pepsi bottles full of pink gasoline.

I have gone from some pleasant temperatures, at an elevation of almost 10,000 feet, to some OK temperatures along the flat altiplano (high plains), to some of the most crushing heat I've experienced so far. It was flat, flat, flat. Even the cactus refuse to grow in this area. All there is, in the parched sandy desert, are pathetic little shrubs no more than 45 centimetres in hight. The hellish heat was rising from the pavement and surrounding desert as if it were ready to engulf me in flames at any moment.

I've now done 550km's, a long day for me especially in this heat and considering the fact that I didn't really start through the tunnel out of Real De Catorce until almost noon.

OK, so now I've relented and checked out one of the ubiquitous "motels". 190 pesos for 12 hours. At least this one calls itself a Hotel/Motel. For those who haven't read my blog from the beginning ...shame on you!... A motel in Mexico and Central America is not the same as in Canada and the USA. It's a place where couples go to "release some tension". Sometimes those couples are actually married to each other. 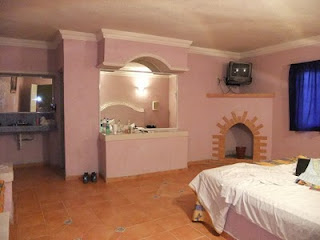 
Ellie is safely in the carport behind a privacy curtain. The pink room is huge by Mexican standards. There is delicious air conditiong, a TV, A fake fireplace and all the hot water you can use. Beside the bed is a phone where you just dial 9 for anything you need and they'll bring it to you. Just so you don't have to answer the door naked when they bring your order, there's an opening in the wall with a rotating contraption built in for smooth delivery of your refreshments and reciprocal payment. I have to admit I kinda like this place. It's spotless and very quiet, albeit without Internet access. 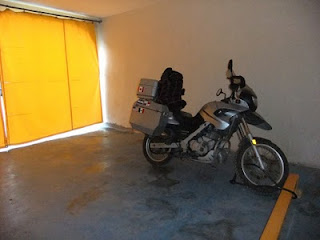 Ellie Safely Tucked Away in the "motel" Garage


Refreshment delivery system at the "motel"


For some reason, every time I check my maps I seem to be 1000km's from the US border. It's kinda like the movie Groundhog Day where the day repeats itself over and over again. Except this version has lots of friendly people and plentiful cheap food.

These past two days I've ridden 550km's and 785km's respectively. Way too much! But it's not very interesting scenery and the towns along the way simply don't hold my interest enough to want to spend the afternoon there. So it's been ride, ride, ride just to get further north.

After riding in the afternoon heat yesterday I decided to leave early to beat the heat today. I zoomed off at 7:00am and watched the sun rise in my rear view mirror. A beautiful sight. Before too long I had to stop to put on another layer to keep warm.

Zona de Talve...something warned signs in several places along the highway as the early afternoon sun was beating the ground into submission. What the heck does that mean? I mused as Ellie was being buffetted by the wind. Must have something to do with winds I thought as I looked at dozens of spectacular dust devils rising into the air all around me ...oh yeah! That must be it! For about an hour I gripped the handlebar very firmly and squeezed Ellie hard between my legs, lest I become an afternoon snack for the buzzards should I end up riding through one of those. Believe me, they're no fun. I speak from experience and they're basically mini tornadoes without the force to do significant damage. But they can easily make you lose control of the bike and make you become an ornament caught in a barbed wire fence. 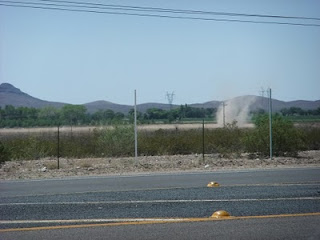 It's going to feel a bit strange speaking English again when I cross the US border tomorrow.