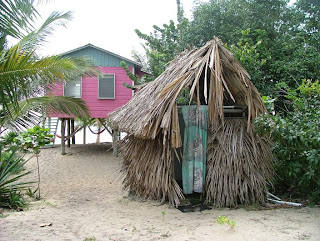 Jungle Shower on the Beach.

The next two days I had no desire to cycle whatsoever. I camped out on the beach underneath a palm tree after checking for precarious coconuts. A jungle shower was available and the nights were breezy and peaceful. I cooked a meal on the beach and ended up seriously blackening all my cooking gear with that foul kerosene I was using. I was avoiding the chain smoking North Dakotans like the plague and I ran into a small family from NY, NY. They took me under their wings and I ended up catching rides in their rented SUV and joining them on a river tour and snorkeling trip. The daughter is a New York City park ranger, her mother is a musician and composer. The mother's husband is an organist. We drove to a small, unexcavated Mayan ruin and walked on top of it. I think we may have angered some Maya gods in doing so since my pictures ended up blurry and my mosquito bites were now beyond my counting abilities. 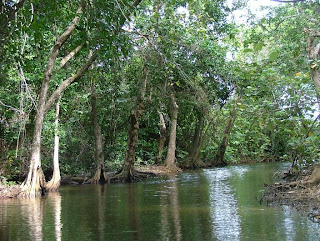 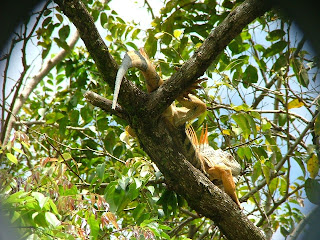 Lazy Iguana Along the Sibun River.


During the river tour we went along the mangrove areas and up the Sibun River to see some amazingly huge iguanas, turtles, crocodiles, little blue herons and a few others. The snorkeling tour was out of this world. It was a 35 minute ride in an open boat out to the reef. There we lazily floated while fish swam within 2 or 3 feet of us. I saw so much colour I didn't know what to make of it. Parrotfish, Sargeant Majors, Barracuda, lots of little stingrays with their beady little eyes, Damselfish and a bunch of others I never heard of. I even managed to see a Scorpion Fish, the ugliest beast I ever saw.

The last night in Hopkins we drove into Dangriga for dinner. It's a mini Belize City with all the ramshackle huts and buildings and a bustling commercial scene. It seemed that once again the Chinese and East Indians were running all the stores. I was looking for a new pump and an East Indian storekeeper suggested I go to the "Chinese Store". I finally found the Chinese pump for $4. I'm sure not going to test that one out too much. 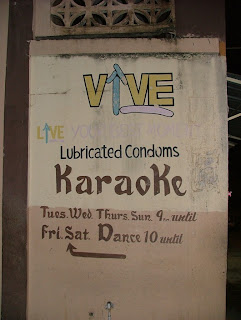 Taking Care of All Your Basic Needs in Dangriga.