The Sand! The Damn Sand!!


Since I was the only guest at the campground, nothing woke me up in the morning. That was a good thing, since I had to do several starlit nocturnal squats during the night. The sky was simply stupendous. There were so many stars that I had no idea what I was looking at. Not that I really know what I'm looking at if there's only one star in the sky. But it's the kind of sight a typical city person rarely ever gets to see. I could picture myself lying on the beach, with Patti by my side, musing about life in outer space. Of course, we'd be covered with a heavy blanket since it was freezing cold with a stiff wind blowing.

When I finally crawled out of my tent, feeling all groggy and still a bit bagged from yesterday's ride, it was 9:00am. Vicente Lucero, the substitute campground caretaker made me some free coffee and graciously allowed me to butcher his native tongue for my peronal practice. He's a fisherman/captain and takes gringos out on fishing tours. 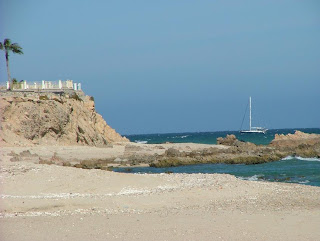 
I debated hard about whether to take the new paved road inland or the old unpaved dirt road along the coast. I finally made the decision to take beauty over ease and went along the coast. The sand was as brutal as ever and I once more made a little crasheroo. This time it was my left knee that came away bloody. I didn't even bother washing off the blood this time.

As I rested in the shade, a few vehicles went by. At least I felt comfortable that someone could give me a ride if it got to be too much. Within minutes a Hummer driven by a young Mexican couple stopped and the pretty female passenger asked if I wanted a ride. I politely declined since I had only done 4km's so far.

Further along I ran into a few Americans who were developing parcels of land in a gated community. Very nice folks who gave me tons of info on the road ahead and San Jose Del Cabo. They also confirmed the nasty rumours I'd heard on the plane, about a Mallwart now open in Cabo San Lucas. When the man heard I had stayed at the Campground in El Cardonal he asked if I ran into the crazy manwoman who runs the place. "He's a guy who thinks he's a girl, you know!" he bellowed. "What a character". I debated for a split second whether I should educate him about transgender people, but decided not to waste my time. After all, I am on vacation and not really all that interested in setting ignorant people straight any more. 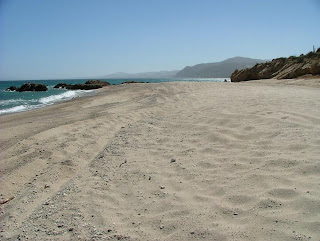 Only One Other Person on This Beach.
Had Nice Nap Here.

Time for a nice little nap on a deserted beach. A beer toting lone gringo walked by and said a few words before heading off into his own space. As I was having lunch, more stoked gringos appeared on four wheelers, and one bellowed out as he roared past "we could see your red arms from way up the hill". I made some comment about it being for safety reasons and better visibility for other road users. 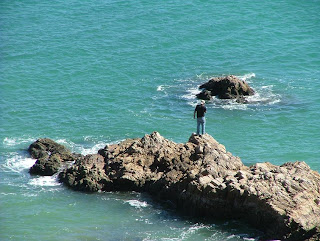 So there I was pulling into Los Barriles, after only 20km's. I was glad to be getting off the sand and dirt road. But a large part of me was also already missing the solitude of the coastal stretch of road. Huge McMansions lined the dirt road heading into town. Kinda sad, kinda cool, kinda not me, kinda could get used to it. Time to find some food in town and go to bed. 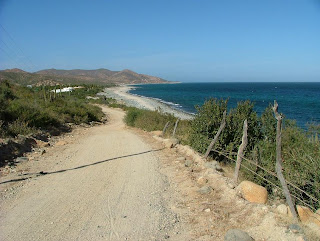 Between El Cardonal and Los Barriles.

A Scrabblebiker needs food, lots of it. So off I went in the dark in search of sustenance. I had been told by savvy creatures in the RV park that the town was actually 3km's away. So I saddled up the old mountain mule and rode off into town with my trusty $4.99 MEC flashing light clenched between my teeth, since it was now dark.

As I happened into town, my sharp eye spotted a bunch of hungry looking gringos heading into some sort of restaurant. I inquired as to the place and was advised "It's as good as it gets". So I went in after tying up the old mule outside. I immediately ordered a margarita after inquiring about whether it was made with real lime juice. The annoyed bartender assured me that it was. The first one went down quickly and I ordered a second one. Only then did I learn that they were "margaritas locas". I'm not sure what they put in them but I did stumble out of the bar after only two of them. The rather good veggie burrito did little to absorb the alcohol either.

Throughout the night, a bunch of gringos and gringas were having an ass kicking kind of night by singing all kinds of karaoke songs. When the sad love songs came on, I found myself in tears and missing Patti so freakin' much. It was so unauthentically Mexican, yet so authentically fun for everyone that I simply had no choice but to concede that it was fun for me too.

The witching hour was nearing and I don't do too well late at night. So I paid up, and left the waitress a nice tip for complimenting my Spanish. She even asked if the English menu was OK for me, since she wasn't sure due to my good Spanish. Well, in my dreams I'm sure that would be true. But thanks anyway. Now I had to get back on the bike and pedal back to the campsite under the influence of two "margaritas locas". I only dropped the bike twice in the sandy arroyo. If you don't know what an arroyo is yet, then you obviously havent' been reading my entire blog ...back to the start, hoser!

Good night all and stay tuned for more Scrabblebiker (mis)adventures.