My excitement rose as I thought more and more of my upcoming trip on the Uchuck tomorrow. I was actually on the road by 8:30am. That's quite a feat for someone like me who likes to sleep in. More quiet roads greeted me along the way through Courtenay and Campbell River. Campbell River happened to have a Driftwood Chainsaw Carving contest and all their artwork was displayed on the way into town. That's where I met my new love, the Wild Man Of the Woods. He and I will run off together and live in the woods. Still not sure how that's going to work, with me being lesbian. But we'll figure it out as we go along. 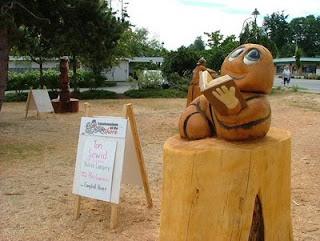 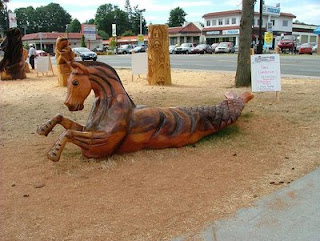 Pretty interesting stuff one can do with a chainsaw


As luck would have it there was a Sunday market so I stocked up on some produce for the long arduous voyage to Gold River and beyond ...I love being dramatic, don't I? Campbell River has become a bit of an overused tourist town with the usual tourist oriented shops, but it does have a certain charm right beside the water. It even has aggressive and idiotic drivers, including one who gunned it to run a red light as I was finishing my left turn. I managed to yell "red light"!!! as she smacked on her brakes with a dumbfounded look on her face. After I was out of the way she proceeded to continue running the red light ...oh well, must be a Vancouverite visiting for the weekend. 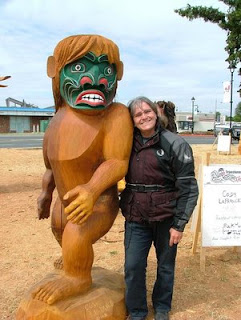 My New Love. The Wild Man of the Woods

Now came the really enjoyable part. I was once more in an area with no towns, houses or cell phones. The road to Strathcona Provincial Park and Gold River is an absolutely fantastic motorcycle road. A bit bumpy at times but nice and twisty, like all good roads should be :-) Strathcona Provincial Park is one of the oldest provincial parks in BC. But for some reason they manage to have an open pit mine right smack dab in the middle of it. Buttle Lake is downright peaceful and stretches on forever and ever as the narrown two lane road twists along the east shore. At the tip came Myra falls. Such an Idyllic little spot to sit and reflect on life with very few tourists hanging around on a Sunday afternoon. 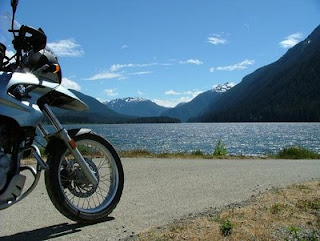 I hadn't seen any wildlife since Victoria but suddenly there were three deer on the road within 5 minutes of each other. Since deer and motorcycles don't particularly enjoy smacking into each other, I brought the speed right down to way below the speed limit. I would like to keep the rubber side down so I can ride another day. 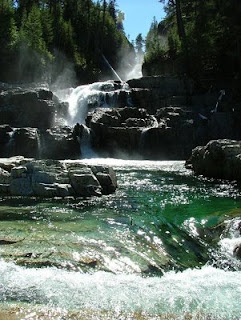 
Gold River hasn't changed since the last time I visited about 15 years ago. If anything, it's shrunk and some stores are sitting empty since the mine shut down. The whole town only came into existence because of the mine. Like so many company towns it has suffered with the loss of their main employer. But logging and tourism continue to support its' economy for now.

Camping in Gold River is 6km's south of town right by the river. Aside from one teenaged yahoo speeding through the campground, choking everyone in a cloud of dust it was downright peaceful and I was able to relax to the sound of the river rushing by as it lulled me to sleep.