The morning starts off grey and drab, in sharp contrast to my sunny mood. Low clouds shroud the nearby hills as I take down camp, eagerly anticipating the MV Uchuck III. I rode up to the dock and a forklift driver drove over and immediately said "Zeballos bound I presume?". "Just take your personal stuff with you and leave the bike right here" he said matter of factly. 45 minutes later the bike was suspended mid air on a pallet with two deck hands hanging on for balance. 2 minutes later is was tucked away on the side of the boat with a bunch of incredulous tourists gawking away. The kayakers and I are becoming a bit of a sideshow for them. 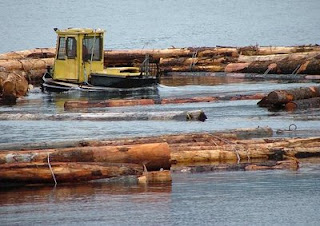 I had a little chat with the eight kayakers from the Vancouver area. None of them were willing to entertain me by falling off the pallets while being hoisted overboard near Bligh Island. Yup! they put the kayak on a pallet, with the paddler sitting inside, and the crane hoists them overboard. Then the heavy pallet is submerged and the paddler just goes on her merry way. And yup! the island is named after Captain Bligh of Bounty fame/infamy. The kayakers suggested instead that I should maybe try the falling off the pallet thing with my bike instead. My argument about kayaks belonging in the water and motorbikes belonging on solid ground did nothing to sway their resolve at staying dry. 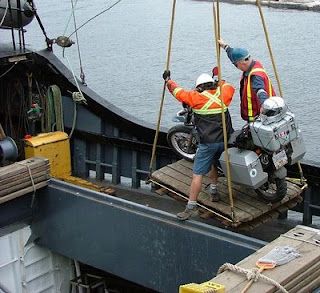 The Bike Being Loaded onto The Uchuck

As the kayakers, "or plastic boaters" as the deckhand called them, were lowered the sun started peeking through. The sea is calm and we're making stops at fish farms ...don't get me started on those!, fishing lodges were we picked up their garbage and gave them some propane and a fresh garbage bin in exchange. 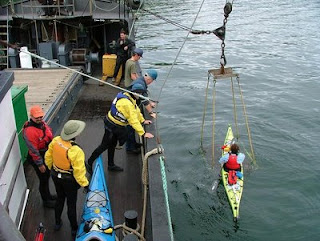 Not one of them fell off the platform 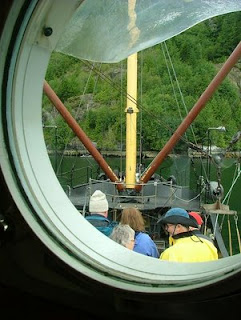 Waiting at yet another fish farm.

Bald eagles majestically sit on treetops along the shore, waiting for some unlucky fish to swim by. A sea otter lazily floats by lying on his back, as though he had not a care in the world. The mountains rise straight out of the water and pictures don't do the area any justice. One needs to be here in the moment. 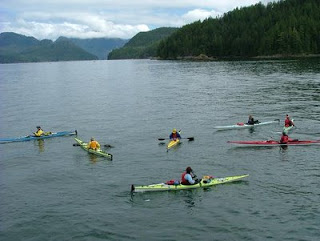 Now even the fish farms and fishing lodges have disappeared as we're heading up the inlet towards Tahsis. It's a wonderfully relaxing trip. No traffic, no obvious junkies hanging about, no buses to drive back and forth and nothing but the wind, hills, water and sunshine to melt away the stress. Not even a single cigarette toting junkie on board ...talk about a double bonus!!!

A short while later, as I was trying to nap on the aft deck, one of those junkies did show up and I had to move elsewhere. I should have just kept my big blog mouth shut and not jinx the situation ..sigh! 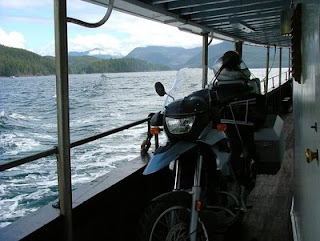 This is definitely major logging country and has been for about a century. One can see the new clearcuts, albeit a lot smaller than they used to be. Most of the hillsides are also obviously covered in relatively new growth. Some obvious horizontal lines covered in different growth crisscross the hills where the old logging spur roads used to be. It gives the area a strange look of semi wild and not so wild. A large seal bobs along the water as we motor through the very narrow and incredibly picturesque Tahsis Narrows enroute to Esperanza Inlet. The only sings of human settlements are the few fish farms, a lodge or two, and of course the numerous small private fishing boats. Not a single boom box to be heard, not a single car to be seen ...no roads, heehee.

We are now docked at another fish farm to deliver more supplies. My attempt to connect to their unsecured wireless network is in vain. I can connect but they have no outside connection to the Internet. Sheesh! you'd think that they could at least provide free sattelite Internet to passing boaters :-) 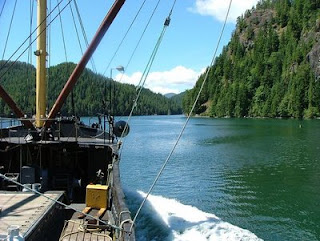 Zeballos is a sleepy little town with not much happening. A nice little place to walk around and do some bird watching. I popped into a store and was greeted with "hola senora" by the Mexican employee Rafael. He's from Mazatlan and he graciously allowed me to butcher his native tongue for a while. I finally managed to steal someone's unsecured wireless signal and finished the blog entry before my battery ran out.

Tomorrow it's off towards Port Hardy or Port Alice. It'll all depend on how sick and tired I become of the dust and flying gravel on these roads.