To The End Of The Road - Literally


The campsite at Wildwood on the way to the Prince Rupert ferry is one I'd reccomend to anyone. The downside is that you're away from town. The upside is that you're away from town and surrounded by trees. It truly resembles a forested provicial campsite. There's free firewood and 2 special little "semi-group" areas. One for hikers and cyclists and one for motorcycles. The showers are truly hot and will sweep you away in a wild torrent of oh so beautiful water if you're not careful. $10/person/night.

Today is the big day where I start heading offroad in earnest. I did manage to find a replacement compressor for emergencies. But no spare tube. I'll just take a chance and rely on my two patched tubes and hope for the best. A quick stop in town to stock up on some food and a wee bit a booze, and to make sure I have a full tank of gas before heading off into the wilds to the literal end of the road on Northwest Vancouver Island.

The pavement soon ended and the gravel road was wide but a little winding. I found myself crawling through the corners at a snails pace and kept repeating my newest mantras "When in doubt, power out"; "Don't look at the gravel, look at where you want to go"; "Put some weight on the outside peg, yes the outside peg". I managed to keep the rubber side down but there were times when I wasn't too sure about that either. 45km's along the dusty road (the $1.50 dust mask was sure coming in handy) the company town of Holberg appeared. Population 75 when Joe and his family aren't on vacation. There's a post office, general store run by Czech immigrants with an extremly cute young daughter ...ahem! she's only about 10 years old, what were you thinking?? There's even a pub and restaurant open in the afternoon and evening. 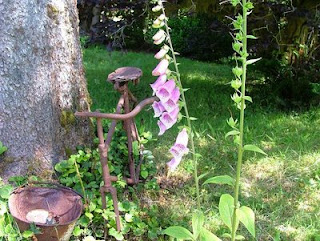 
The nice ladies at the post office pushed a brochure for Brent Ronning's Garden into my hands and suggested a visit might be in order. It's on the way to Cape Scott. Off I clattered into the dust, becoming more and more comfortable with the bike. It handles incredibly well on these roads. A grader was working along the way and that section was quite miserable for now. 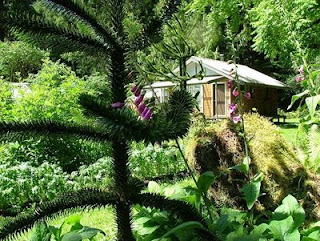 
Brent Ronning's Garden is simply a little piece of paradise in the middle of nowhere. The area between Holberg and Cape Scott was once settled by up to 1000 people. Many of them immigrants who were promised a new life and a provincially funded road to the area. Like so many of today's political promises, it didn't come true. With no effective means to bring their farmed produce to market, the settlers soon abandoned their homesteads. Of course the generally foul weather didn't help much either. Brent Ronning was a trapper, camp cook and an avid horticulturalist. He cleared five acres out of the rain forest and ordered seeds and plants from all over the world to create his own little paradise. There are now monkey puzzle trees, rhododendrons, white walnut trees, roses, Japanese conifers, and many other plant species not found in this area. Especially not 60km's away from the nearest real town, in the middle of some rain forest. 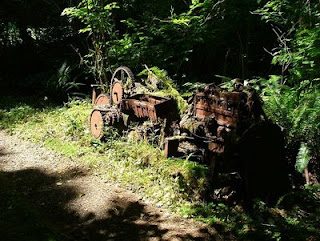 
The current owners are trying to identify and save the plants and have a newer cabin on the property. There's even a garden and a greenhouse where they grow lettuce and tomatoes. I spent about an hour there all by myself dreaming of having my own homestead somewhere. But really, I'd probably get bored after a few weeks or months. 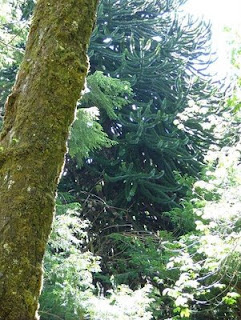 Monkey Puzzle Tree In The Middle Of a Rainforest.
Bernt Ronning's Garden.


The road became even bumpier, narrower and very poorly kept. Still passable in an regular car but you need to take it easy. I pulled into the one commercial campground near the Cape Scott trailhead and a wild looking character with a beard and scraggly look emerged from the bushes waving. I waved back and kept going to the end of the road. On the way back out Doug, the scraggly owner of the campsite intercepted me and we had a nice chat. I opted to park at the trailhead and walk in 45 minutes to camp on the beach at San Josef Bay. My little climbing pack was bulging and the tent and sleeping back got strapped to the outside. Off I trundled on the easy and flat trail. 45 minutes later the traile alit onto the beach and it took my breath away. 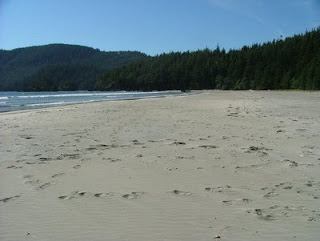 Talk About a Paradise of a Campsite.
Beach at San Josef Bay, Cape Scott Provincial Park.


There was absolutely no one on the sandy beach at the end of the bay surrounded by low, tree covered hills. I set up and cooked a basic meal while listening to the waves lap against the sand. A few more people showed up a bit later and I managed to get some free gin out of them. I tried to be in the moment and even sat there for almost an hour watching the tide go out so I could walk around the headland to get to the second beach, just for the hell of it. 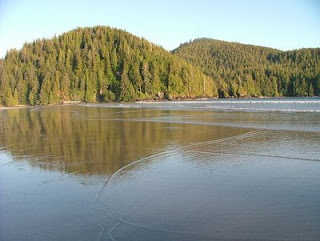 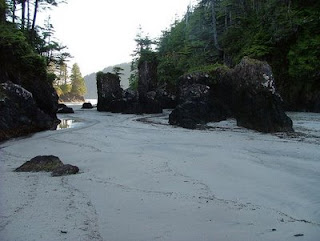 Off to bed and hike out sometime during the day tomorrow. I'm really enjoying this unstructured, on a whim kind of travelling.