July 19, 2008
Well, the long awaited vacation time has arrived and I'm going to be off once more. This time on a motorbike. Yup, I can already hear the bicycle purists sighing. But hey! I'm a "biker" of more than one kind :-)

The plan is to take two days to get from Victoria to Gold River. Then hop on the MV Uchuck III for the 8 hour trip through supposedly amazing passes, narrows, etc to Zeballos. It's a working supply vessel which supplies the logging camps, settlements, fish camps along the northern Vancouver Island coast. Some very smart marketing person with this outfit came up with the idea of taking along passengers for extra revenue.

From there I'm hoping to explore some of the remote coastal areas near Port Hardy and Cape Scott, as well as many other places accessible by logging roads. Then slowly back down the island to be back in Victoria after 9 days. Of course, there will be some hikes happening along the way and my hiking gear is all crammed into my bike. Heck! I even have a folding chair with me :-)

Once back in Victoria I may have a day of, or not. Then Patti joins me for the next 4 or 5 days to head back up towards Parksville and Qualicum Beach. We'll head over to Lasqueti Island for 2 1/2 days. It's an island with no paved roads, no car ferry (but motorbikes are OK on the passenger ferry ...hehe). 2 nights in a local B&B at the remotest part of an already remoted island. Then back to Vancouver Island on Saturday, over to Vancouver to celebrate my 46th birthday with a small number of friends. Then we hope to ride with Dykes on Bikes in the Vancouver Pride Parade on Sunday, and then back to work on Monday while Patti flies off to Kitchener/Waterloo to spend time with her dad and sister and family. 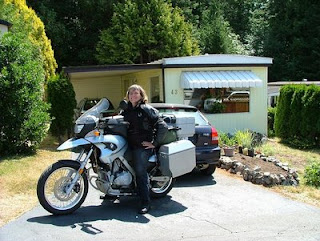 After spending as much time as possible with Patti I crept out of her driveway at the early hour of 12:30pm. After all, I do have two days to make it to Gold River. There I'll be hopping on the MV Uchuck III to head up to Zeballos. They'll even take the bike on board for only $25 extra. I wonder if they rename it the MV Upchuck III when the seas get rough?

An odd thing happened on the 50km trip from Victoria to Duncan. It took me about 90km's to get there. Too many tempting little side roads and logging roads heading into nowhere. It was hard to leave but once I was on that bike I didn't really understand what all the fuss was about. I was "home" once more as soon as I hit the road. From there I pretty much stuck to the highway and the secondary road along the coast just to make some good time. The stress was melting away and not one single work related thought entered my mind ...until that double decker bus from Victoria came rolling past in the other direction near Duncan. Are they now following me and spying on me? I damn well told them I wasn't doing any more overtime!! Leave me alone!! :-) 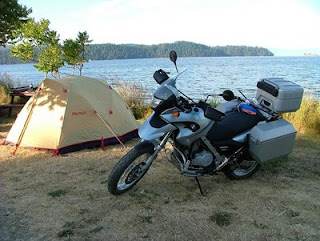 So here I am in the hamlet of Bowser at some little campground right by the water, Deep Bay RV Park. The town of Bowser neighbourly types are having a little get together here, all 25 of them, and I managed to score a free beer ...yeah! Never mind that the camping costs almost $27. So I'll make up for that with a frugal dinner. Couscous and Zucchini from the garden it is. Now was a good time to open the little sample bottle of hot sauce I bought in Belize over a year ago. Might as well drizzle the stuff onto the couscous. Fire engulfed my mouth with the first bite and only beer kept the heat down. Now my sinuses are clear and I should be able to sleep well.

Now I'm sitting at the picnic table outside listening to the waves lapping against the shoreline and mooching off someone's unsecure wireless network. Sipping my tea I look up onto the dusk shrouded straight of Georgia and I get an amazing glimps of a reddish moon rising. What a nice way to finish the day. Motorbikes, travel, nice herbal tea waves and moonrises. What else could I want? ...except being independently wealthy. 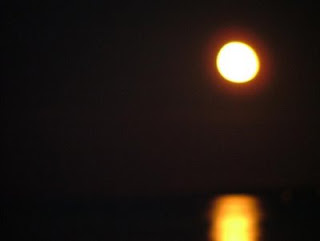 Kelly Hays said…
Using a motorbike, that's cheating...I understand why though, I would like to see the world on a powered bike. You see just as much, but much faster, and easier. Sounds like you will have a good time on the Island, a place I would love to spend some time. I feel like I should explore as much as I can away from home before I take a closer look at home. Tanya and I are trying to put the final touches on our next trip, which will be year long and take us to India and Europe. It's pretty exciting, we are going to buy our tickets in the next few days. Have fun seeing the Island.
July 21, 2008 at 9:27 p.m.